Do you know that Kitashoji has been making Sake in Hineno, Izumisano since 1910? Since the Kamakura era “Sho no sato” Sake has been produced in Hineno, and many others have followed it’s lead. Lately Japanese cuisine and Sake have become popular worldwide, and Tomoyuki Kitashoji (a 4th generation Sake maker) wants to share his Sake with the world, as well as his neighbors.

His father was the 3rd generation in the line of Sake maker and he cared more about quality than quantity, and produced Sake in small butches. 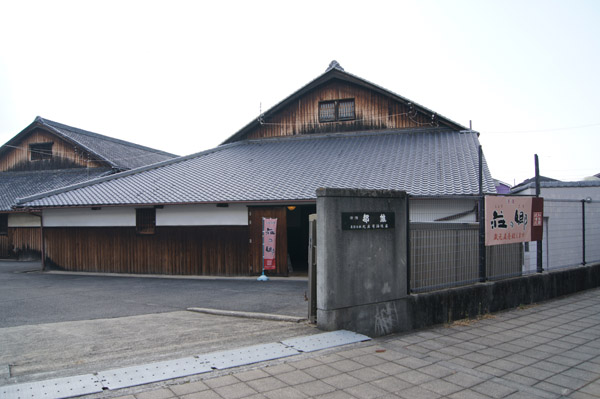 Sake is basically made from rice and water. Kitashoji chooses only the best rice for it’s Sake. The rice they use is called “Shuzou Kouteki Mai,” and it is used only for Sake. The flavor is quite different from rice you would find on the dinner table. One famous brand of rice used for Sake is “Yamada Nishiki.” Two of the main classifications for Japanese Sake are Ginjou and Daiginjou, Daiginjou being considered the best. The rice is washed and polished then steamed in a large basket called “Koshiki.” After steaming the rice, yeast is added and the mixture bonds together. 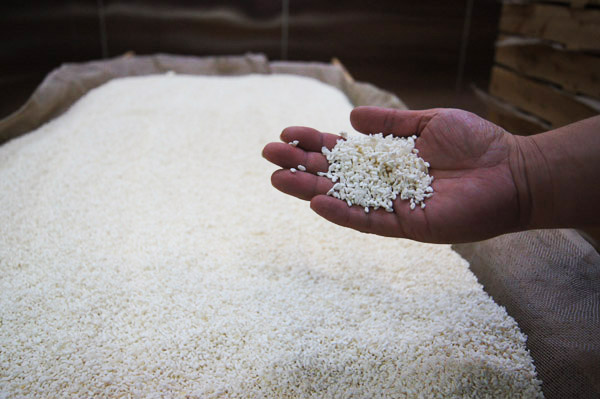 After steaming the rice, yeast is added and the mixture bonds together.

After the rice has cooled, malt seed is spread over it and then mixed together. The mixture sits for about 3 days then it is put in a tank and water is added. The cheap Sake you can find in cartons is made from the same rice that people use for cooking, therefore it’s nothing special. 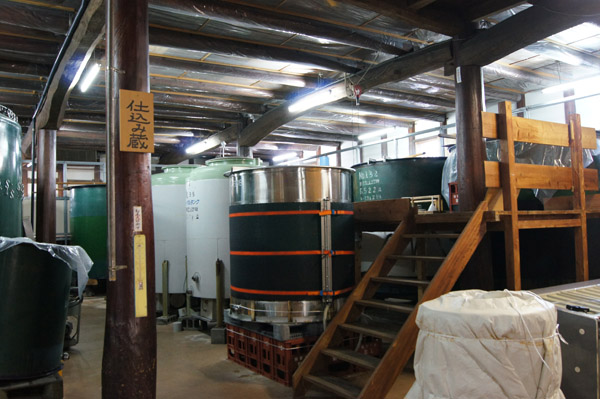 There was a lot of big tank than my height.

We were able to look at rice that had been soaking in the tanks for 2 days and for 5 days. In the 2 day tank the rice has still clearly visible and floating. They used a large paddle type device to push down and mix the rice. 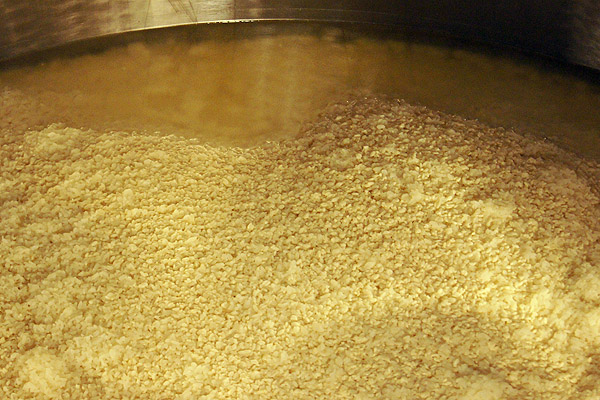 In the 2 day tank the rice has still clearly visible and floating.

As soon as the lid of the tank that had been holding the mixture for 5 days was opened, an unmistakable scent of Sake filled the air. Because of the fermentation process, there were many bubbles and you could actually hear them quietly popping. The sake was alive. 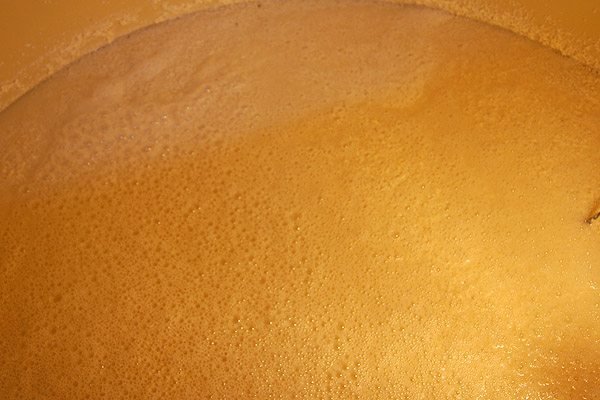 There were many bubbles and you could actually hear them quietly popping.

The process of adding rice and water continues for about 20-25 days until a mash has been created. The mixture is then put into a compressor and then raw sake is produced, and what is known as “Sake kasu” remains in the machine. This is what remains of the rice. The “Kasu” is then processed flat, cut and then packaged to use in various recipes. 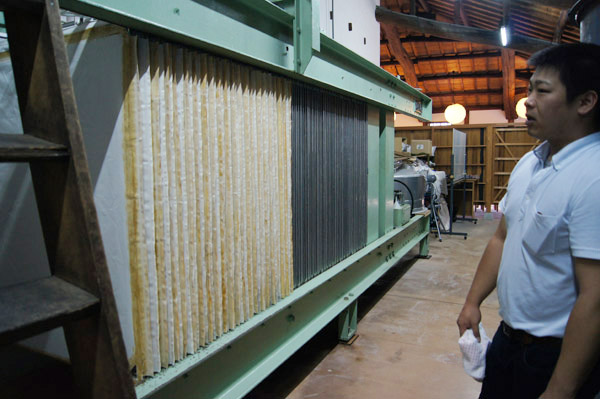 The sake kasu from Kitashouji is sold to a miso shop in Nara and used to make an extremely delicious roasted green onion miso paste. The scent of the kasu and the flavor of the onions make a great combination and you can’t stop eating it. With a meal, as a snack, or with beer are perfect matches. 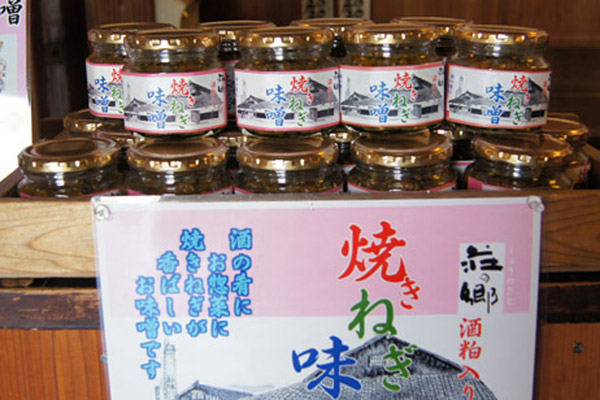 With a meal, as a snack, or with beer are perfect matches.

Building a deeper, wider connection in the sake brewery

There is a small shop as well as a tasting corner in the sake brewery.Tomoyuki wants to add other products related to sake to his shop to deepen the connections with customers as well as other vendors and producers. He had a big smile and you could tell that he really cared about sake, and the community. 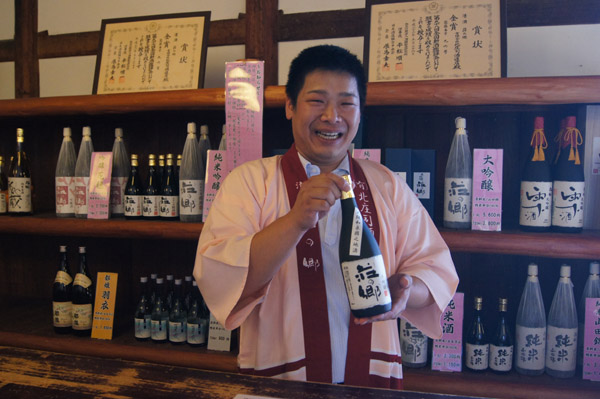 Starting 3 years ago; twice a year, when new sake is released, they have festivals at the brewery. Tomoyuki said that only making good sake wasn’t enough and wanted to reach more people through different means, so he created the neighborhood festivals. He hopes to deepen the community bonds as well as broaden the world of his business and his friends and family. He is working for the future. 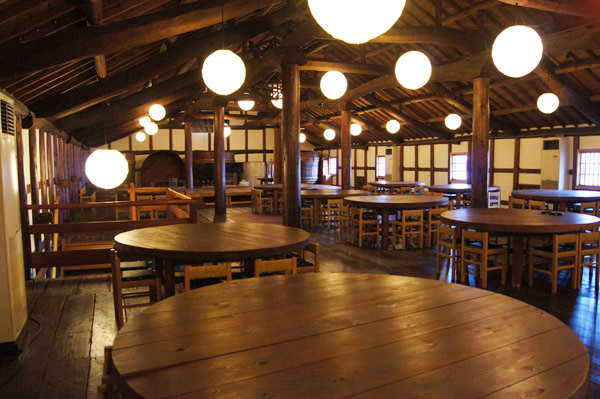 The second floor of the hall, are outfitted with a grand piano.

Kitashoji has been making Sake in Hineno, Izumisano since 1910. They care more about quality than quantity, and produced Sake in small butches.

Kitashoji has been making Sake in Hineno, Izumisano since 1910. They care more about quality than quantity, and produced Sake in small butches.