We would like to introduce you to “Tesuki Konbu” that has been made by Gouda shouten since 1946.

Since the Kamakura era kombu has been transported by boat from Hokkaido to Honshu. After the year 1400 many advancements were made in boat technology. The boats known as “Kita mae bune” were developed and that allowed more and more ports to be reached. Kombu made its way to Obama, Fukui and from there, followed the “Mackerel road” through Kyoto and to Osaka. This created the foundation for Kansai soup culture. Around the start of the Edo period kombu reached ports in Kansai by routes through the Seto island sea as well. This route, starting in Hokkaido, became known as the kombu road. 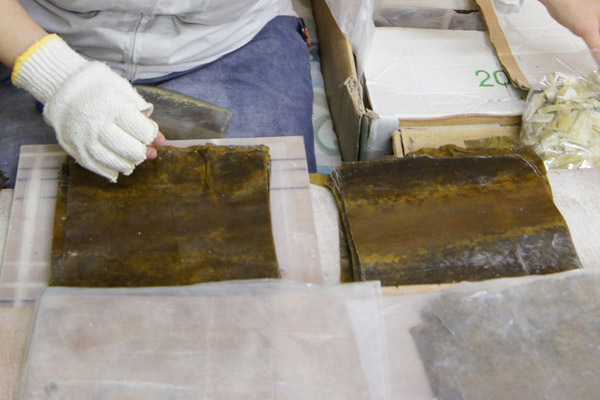 Using the best kombu from Hokkaido

Sakai knives are world famous for their high quality, and when they were used to thinly slice fresh kombu, “Tesuki kombu” was created. From the Taisho period to the beginning of the Showa era, around 150 kombu producers were started in Sakai, Tesuki kombu is made using the best kombu from Hokkaido, known a “Shiro guchi hama makombu.” The kombu is quickly dipped into vinegar to soften it before slicing. The secret to Gouda shouten’s delicious kombu is to keep adding vinegar to the dipping container as it dissipates; this allows the flavor of the kombu to build and strengthen.

When the kombu is sliced, it is done very thinly, and the process resembles wood plaining, or sharpening a pencil. The best craftsmen can slice it as thin as 0.03mm! When using a serrated blade, the sliced kombu looks like thread. 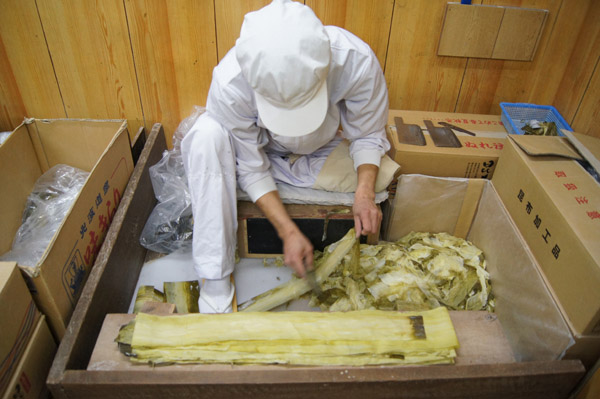 The craftsmen slices fresh kombu one by one.

Lately, the use of kombu has been declining, but last year a new seasoning for kombu was created. “Shio koji kombu” was created by a collaboration with Ame kaze shoyu.

Shio koji is a traditional Japanese condiment made by fermenting malted rice, salt and water. 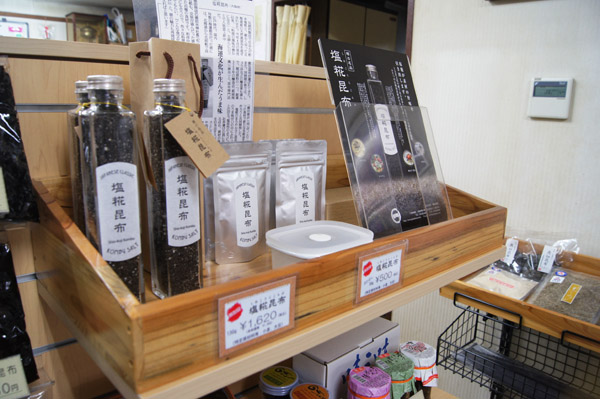 “Shio koji kombu” was created by a collaboration with Ame kaze shoyu.

Finally, the perfect combination was found and “shio koji kombu” was born. After being featured on TV, it has been almost and impossible to keep in stock, and it has been patented by Ame kaze shoyu.

“Battera sushi” uses a special handmade kombu called “Shiro ita kombu” during and after World War 2 the locations and people able to make this special kombu steadily decreased. There are 5 people working at Gouda shouten, who are making this handmade kombu now, for other shops as well as their own brand. Kombu is high in minerals and fiber and is great for your body. 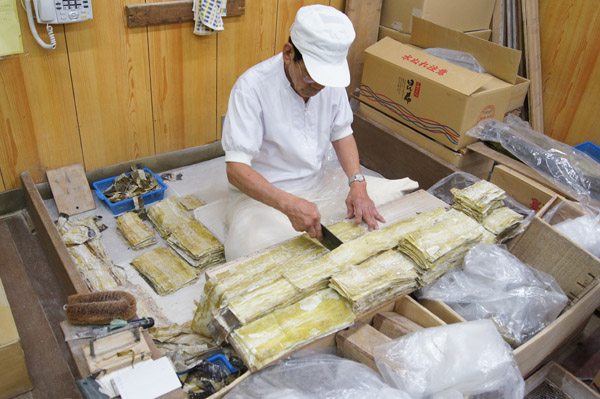 Since the introduction of shio koji kombu, the stockists have been increasing. Not only restaurants, but specialty retail shops as well.The demand for Kombu soup base has been in decline, but “We hope that the success of the shio koji kombu will trigger the resurgence of kombu’s popularity in Japan,” said Mitsunobu with a smile. 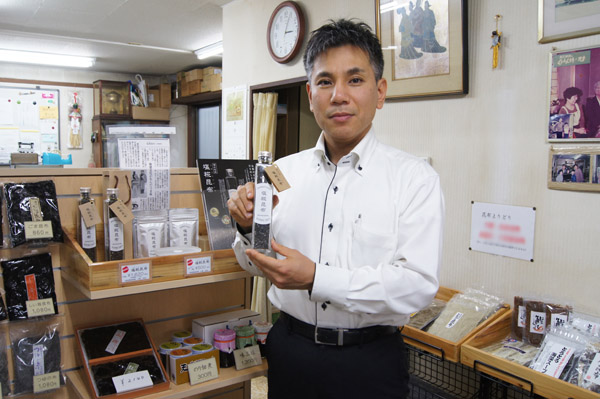 “Tesuki Konbu” that has been made by Gouda shouten since 1946.