Spreading the charm of chusen dye through a new business model

Nowadays Nijiyura chusen dyed tenugui towels are very popular amongst women. In Nakazakicho, Osaka, they have a store that sells their original tenugui that are dyed using traditional techniques as well as their own accessories; and customers come from far and wide to shop there. The truth is, the factory is in Sakai and we went there to find out it’s secrets.

The 2nd generation president of Nakani company; Yuji Nakao, created many fans of Nijiyura by using a traditional chusen dyeing technique. Yuji is passionate about chusen dye, but in his younger days he didn’t want to work in the family business at all. After graduating from college he worked for a top electronics manufacturer in Japan. After his first year at the company he received outstanding evaluations. Because of on the job training he didn’t get many chances to return home, but suddenly one of his family members passed away. Previously; when he was in university, his father badly injured his arm at work. This caused Yuji to think that bad things would happen to his family when he was away. 2 bad things had already occurred and he didn’t want anything else to happen, so he decided to go home and take over the family business. 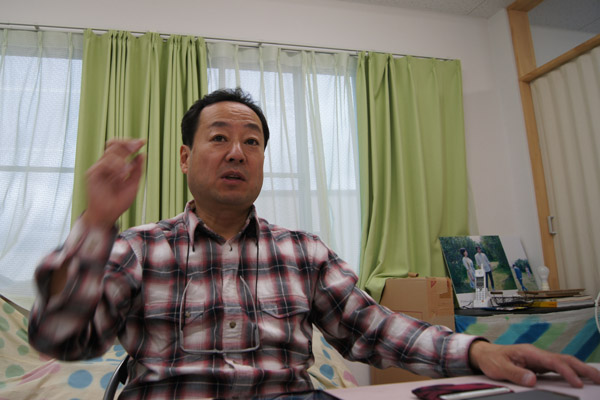 Around the time that Yuji became president the chusen dyeing technique was designated a traditional Japanese craft. He had the feeling that someone told him that chusen wasn’t good business and that he wouldn’t have enough food to eat. The family business and the dye industry were not doing so well. Even though there was a lot of competition in the print and dye industry, Yuji wanted to keep producing goods with chusen dye and to preserve and perpetuate the traditional craft. In order to not become exhausted by the industry he thought of a business plan that placed importance on the factory and products that craftspeople could take pride in.

In 2008, Yuji came up with an unconventional idea that had never been seen in the dyeing industry. Nijiyura is a product that craftspeople want to make, is made in their own original style, and choice of colors. The most unique thing about Nijiyura is the way the color bleeds and achieves gradation; and this is something that is difficult to achieve with other printing processes. We went to the factory to see the process of handmade Nijiyura tenugui. 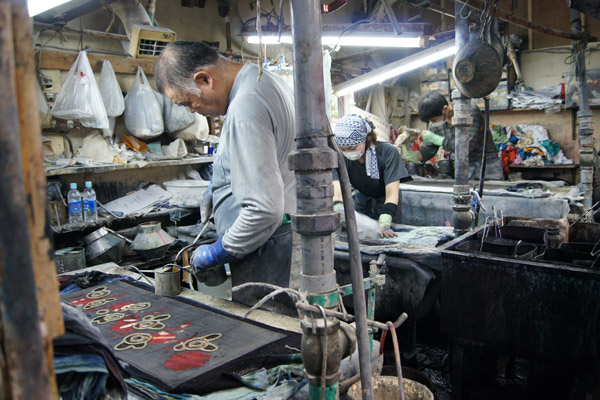 Placing glue (itaba)
As opposed to other printing techniques the screens are made by creating holes in the screen where you don’t want color to hit. White fabric is placed in the frame and color resistant glue is screened where dye will not be added. The long piece fabric is screened, folded and slid to the side. If the screen is off by even 1mm the will design will not match up, so this requires a great deal of skill. 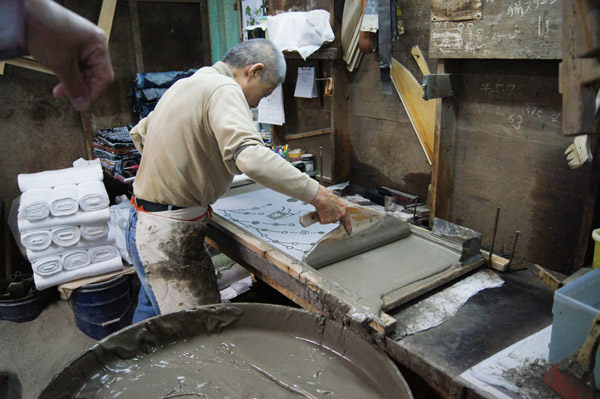 Dye (tsubondo)
The folded fabric is then brought to the dyeing station and dye is poured onto it from a specialized watering can. More glue is place on the fabric to separate colors and each color is placed one at a time. At the same time a pedal is pressed by foot that creates suction from beneath the fabric to pull the dye all the way down. The fabric is then flipped over and the process is repeated. 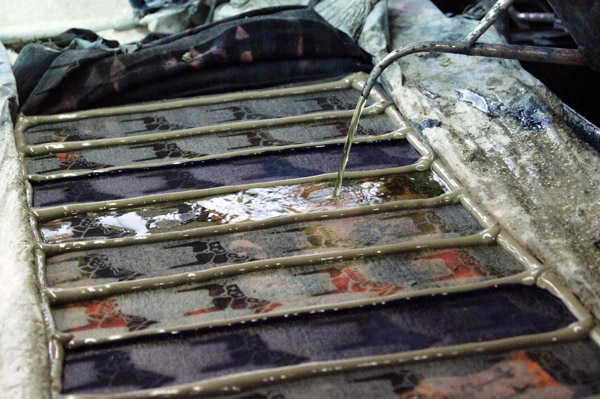 Water rinse (kawa)
After dyeing, the fabric is placed in a big machine filled with water that swishes the fabric back and forth. This removes all of the unneeded glue and dye. It is then placed into a large barrel sized machine that spins out the remaining liquid. 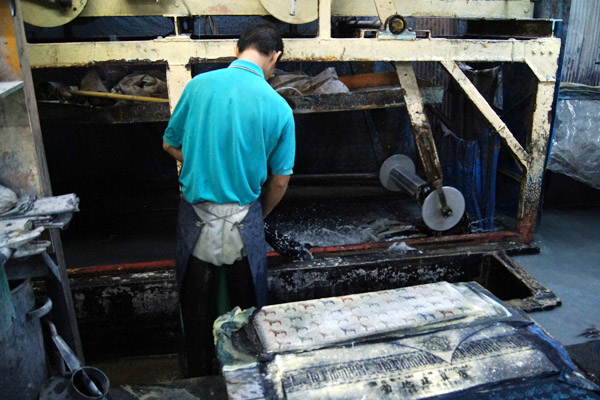 Drying (date)
After spinning, the fabric is either hung to dry naturally or a large type of blow dryer is used. 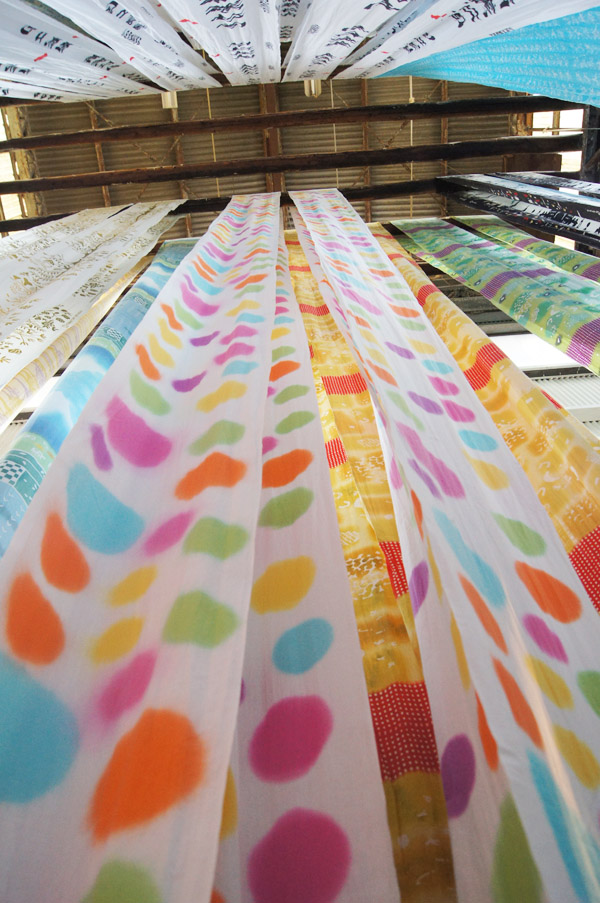 The fabric is hung over round poles that are attached to the walls 7 meters above the ground. The fabric is raised up using a type of crane and arranged on the poles by hand. 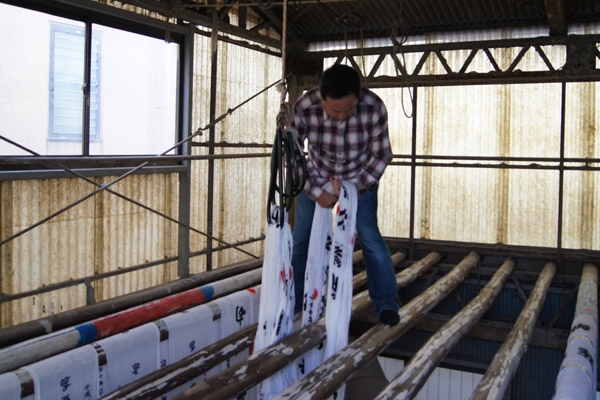 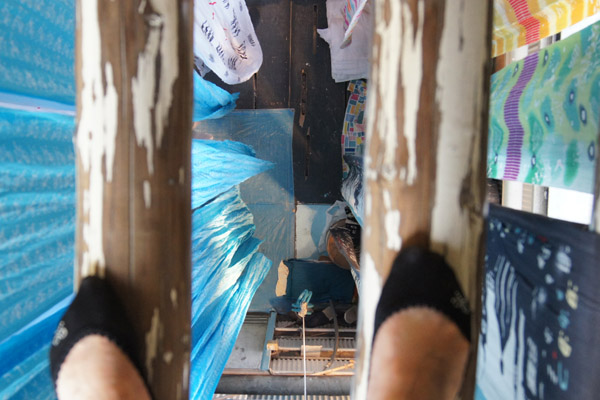 Seeing the factory and the way that the tenugui were carefully and precisely made left us with a strong impression. The special charm is created by the way this technique has been passed down for many generations.
Unhemmed cotton fabric for hot and humid Japan. Designs range from traditional to modern, pop to seasonal, and items from kitchen products to book covers and other interior goods are starting to be made by Nijiyura.

Someday, spreading Nijiyura to the neighborhood

Yuji created a business model that had never been seen until now and the love for Nijiyura is so strong that it should be shared with others. The Nijiyura public relations man; Fujiura, was a former customer. He came to the factory, fell in love with products and asked for a job. 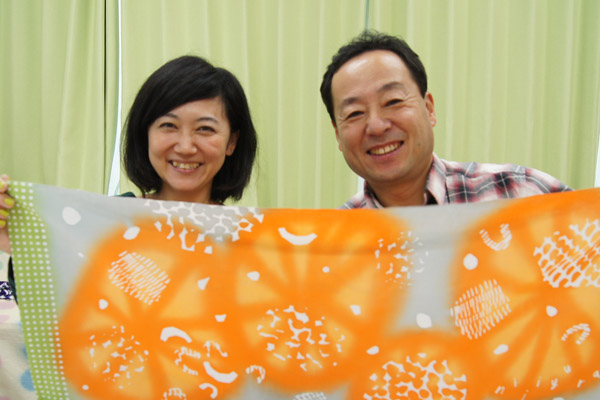 Yuji told us that it was important that at first people learn about chusen and that a shop in Umeda would reach more people than one in Sakai. He wants to spread the love he has for his factory and allow the pride of the craftspeople to grow and prosper. A store was recently open in Tokyo and he wants to open another location in Sakai, someday soon. I can’t take my eyes off of Nijiyura.

Mixed with traditional dyed way and new one, we want to keep the note of chusen to the next generation. Nijiyura was born from such thought.